The climate is changing. This has clear consequences for the weather conditions in the world. The Spanish region of Murcia is affected by this as well. The heavy rainfall in 2016 turned to extreme drought. Since then, water is scarce. The Bejo Zaden site in Murcia was looking for a solution to this problem. How do you get as much yield with minimum water consumption? 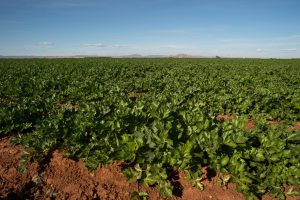 From October to April, Murcia is the ideal place to produce high-quality field crops. The region has many hours of sunshine, stable temperature, and drier soil. Bejo Zaden grows various vegetables, including iceberg lettuce, cauliflower, and spinach. The vegetables are sold in Dutch supermarkets during the winter period.

There is currently a significant lack of water due to extreme drought. A big contrast with 2016, in which heavy rainfall ravaged the area. As a result, a large part of the harvest was lost: there was no spinach in Dutch stores for a while.

After two extremely dry winters, Bejo went to work with a solution. There was already a smaller, raised water basin in which the rainwater was collected. Near the old water basin, they built a new water storage of 80,000 cubic meters. In a strategic position in the bed, so that the basin fills itself in a downpour. There is a filter system to filter out all the waste. A good solution, because the scarce but hard showers fill the basin in a few hours. In that case, Bejo is a long winter ahead.